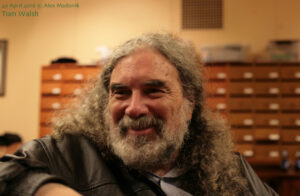 It is with deep sadness that the Berkeley Celtic Studies community announces the passing of our beloved lecturer Tom Walsh.  Tom died on Friday, January 14, 2022 of complications following surgery.  He had been a lecturer in the Program in Celtic Studies since 2010.  He received his Ph.D. in Comparative Literature in 1990 from UC Berkeley.  He then taught at Occidental College, where he received tenure before his nostos from SoCal to the Bay Area to teach at Stanford, UCSC and UC-Berkeley.  His dissertation was published in 2005 by Lexington Books: Fighting words and feuding words: Anger and the Homeric poems.  He also published and presented papers on a wide range of topics, many of them related to Greek and/or Old Irish texts.

As a member of the Berkeley campus community since his graduate work, Tom was an active participant in various groups studying older Indo-European languages, including the Homer club, and later the Greek Reading Group.  He was a regular co-organizer of the California Celtic Conference and helped to host the Celtic Studies Association of North America’s conference at Berkeley.

Tom’s broad and deep erudition made him a unique teacher in a wide range of areas.  At Occidental, he taught Classics.  At Berkeley, he taught Irish literature and Celtic culture classes; his love of the material always shone through his teaching.  He had no need of computer visuals to attract student attention; “chalk and talk” and paper handouts more than sufficed for connection. He also taught what was surely one of the largest Old Irish language classes in North America – to rave reviews from the ten students, completely defying common “knowledge” of the impenetrable difficulty of that language.  (This feat alone might justify the Homeric kleos aphthiton.) He stepped in and taught Modern Irish for a semester as well, when the Program needed staffing.  And he had a deep love of the writing process and interest in teaching writing.  Reading and Composition classes are an unwelcome requirement to many students – but Tom’s students consistently said he turned that around, and made them enjoy growing as writers.

Tom’s kindness and generosity as a teacher and colleague was a gold standard – colleagues who shared his office or asked him questions in the hallway were awed by his knowledge and his willingness to share.  And when he was part of a conference organizing team, he did not just chair sessions – he was always the last to leave the site, never leaving the cleanup to others.  He will be deeply missed by the campus community, including the network of scholars of Celtic and older Indo-European languages.  As Irish traditional wisdom has it, “His like will not be seen again.”

Tom is survived by his wife Laura Watkins, their son Newton Watkins Walsh and his partner Ajax Smith, and also by his brother Ray Walsh.

Condolences can be sent to issa@berkeley.edu.

Contributions in Tom’s memory can be made (by his expressed wish as well as Laura’s) to the Program in Celtic Studies at UC Berkeley.